What Is Ductile Iron Pipe?

In 1947, British H. Morrogh discovered that when cerium was added to hyper eutectic gray cast iron, the graphite was spherical when the content was above 0.02wt%. In 1948, A. P. Ganganebin and others in the United States pointed out that adding magnesium to cast iron followed by inoculation with ferrosilicon, when the residual magnesium content is greater than 0.04wt%, spheroidal graphite is obtained. Since then, nodular cast iron has begun large-scale industrial production. The history of the use of ductile iron pipes can be traced back to the 21.14km water pipeline from the Seine to Versailles in the suburbs of Paris in 1668. 300 years have passed. Except for the maintenance and replacement of some pipes and joints, the main body is still in use today. 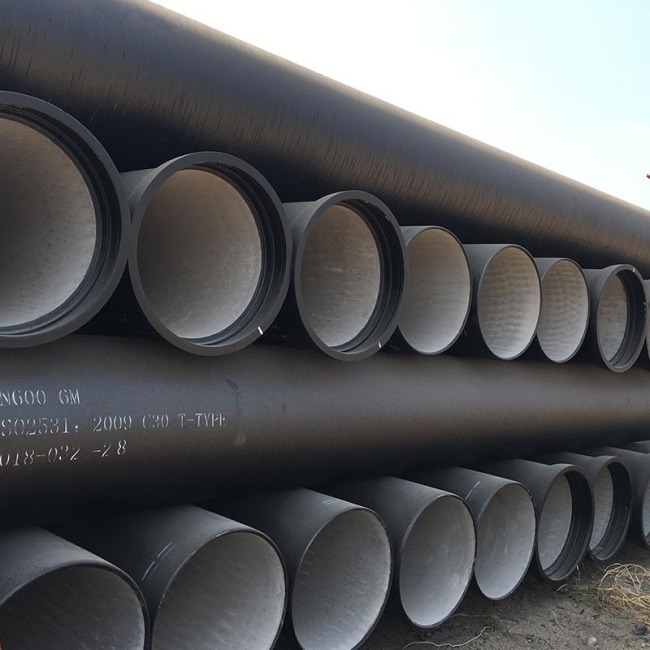 Ductile iron pipe is a kind of cast iron pipe. In terms of quality, the spheroidization grade of cast iron pipes is required to be controlled at 1-3 (spheroidization rate ≥80%), so the mechanical nodular cast iron pipe finished product warehouse of the material itself can be better improved, which has the essence of iron and steel performance. The annealed ductile iron pipe has a metallographic structure of ferrite plus a small amount of pearlite, good mechanical properties, excellent anti-corrosion performance, good ductility, good sealing effect, easy installation, and mainly used for water supply and gas transmission in municipal, industrial and mining enterprises, Oil and so on. A certain amount of spheroidal graphite is distributed on the ferrite and pearlite matrix. According to the nominal diameter and the requirements for elongation, the ratio of ferrite and pearlite in the matrix structure is different. The ratio of pearlite with small diameter Generally, it is not more than 20%, and the large-caliber is generally controlled at about 25%.

Ductile iron pipe is a kind of cast iron, an alloy of iron, carbon, and silicon. Graphite in ductile cast iron is in the form of spheroids. Generally, the size of the graphite is 6-7. The quality requires that the spheroidization level of the cast pipe be controlled to be 1-3 (spheroidization rate ≥80%), so the material itself is mechanical The performance has been better improved, with the essence of iron, the performance of steel. The annealed ductile iron pipe has a metallographic structure of ferrite plus a small amount of pearlite, which has better mechanical properties. The ductile iron pipe is mainly called a centrifugal ductile iron pipe. It has the essence of iron, the properties of steel, excellent anti-corrosion performance, good ductility, good sealing effect, easy installation, and is mainly used for municipal, industrial and mining enterprises water supply, gas transmission, oil and so on. It is the first choice for water supply pipes and has a high-cost performance.